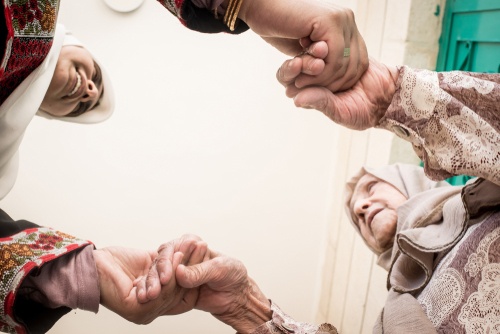 Megan, a young woman diagnosed with a lifelong chronic illness, is a young refugee who fled her home country and immigrated to the United States just 3 months ago. Megan and her family left their country in hopes of seeking a new life, and better access to health care in the United States. Unfortunately, she and her mother were separated from half of their family during their journey, and their whereabouts are currently unknown.

When Megan finally reached the US, she had a 3 month supply of her specialty medication and it was quickly running out. Not speaking any English and having no health insurance, Megan felt lost and unsure of where to go to access proper treatment for her chronic condition. She visited her local hospital and after meeting with a physician and nurse to discuss her condition and treatment, she was then greeted by a friendly Pharmacy Liaison, who works with the hospital specialty pharmacy.  Megan explained to her liaison that, while in her home country she had been taking medication for her condition, however, she was unaware of the name of her medication.

After their conversation together, Megan’s Liaison did some digging and found her previous medical records, which indicated that she was on 3 separate medications for her condition, although Megan’s mother insisted she had just taken one single pill prior to immigrating. After finding out this information, Megan’s liaison worked in tandem with her physician and nurse to identify a similar medication to prescribe to Megan, which was most similar to the single pill therapy that she originally took back in her home country.

Realizing this case was time sensitive, as Megan was running out of her medication soon, her Liaison quickly initiated the benefits investigation to determine her health insurance and the next steps. Megan and her mother also communicated to their Liaison early on, that delivery privacy was of the upmost importance for them during her treatment. Her mother explained that they currently live with another family in local housing, which does not allow them any discretion with deliveries and packages. The language barrier also posed a problem for Megan and her mother, since they could not communicate effectively with the other family that Megan was sick. Because of this, Megan’s Liaison made it her top priority to ensure that Megan’s medication would be delivered by the hospital specialty pharmacy to their doorstep securely and in an unidentifiable package, to guarantee their privacy and safety. This was a big relief for the family and it was one less thing to worry about throughout this difficult transition into a new country.

Megan’s Liaison submitted the proper paperwork and clinical notes to her insurance company, and the hospital specialty pharmacy was able to get her new medication approved and filled in no time. Megan received a call from her Liaison that everything had been taken care of and she was able to begin her new therapy before she had even finished what was left over from her previous fill. Megan experienced no lapse in therapy, keeping her adherent to her new medication and able to adjust to her new life in the United States.