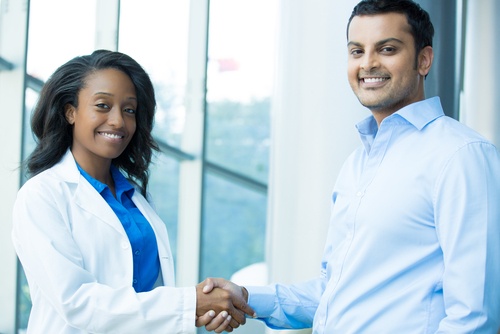 A couple weeks ago, Susan, a patient who was newly diagnosed with a chronic condition, received a call from her clinical pharmacist checking in on her to see how she was adjusting to her new treatment and lifestyle changes. Susan admitted that she had been experiencing some difficulty with depression due to her recent diagnosis and various social stressors. She expressed that she was interested in speaking with a professional about her mood and would like to explore medication options for her depression as well. Her clinical pharmacist listened to this and offered her a referral to the clinic’s social worker to connect her with the appropriate resources, which Susan quickly agreed to. Her pharmacist promptly reached out to the social worker on Susan’s behalf and the social worker responded right away saying that she would contact Susan to discuss the problems she’s been having. Two days later, there still wasn’t an update in Susan’s chart, so her clinical pharmacist became worried and decided to reach out to her on a Friday afternoon to check in on her. When Susan received the call from her pharmacist, she admitted that she was in a very dark place with her depression and communicated that the clinic social worker hadn’t reached out to her yet. She also told her pharmacist about the continued difficulty she’s been having while living her day to day life and that she was experiencing some suicidal thoughts. Growing more and more concerned, her pharmacist confirmed with her that she was stable at the moment, and then immediately contacted Susan’s Pharmacy Liaison to see if she could reach the social worker and her provider directly. Susan’s liaison instantly called the social worker and provider on her case to make them aware of the situation. The entire care team quickly sprang into action to call the patient and assess her current concerns. The provider and social worker were able to secure her a timely psychiatric follow up to address her mental health concerns so that Susan was taken care of in all areas. Later that afternoon, Susan expressed how much better she was feeling even after just speaking with the social worker and her provider earlier that day.

Susan’s clinical pharmacist called a few days later to see how she was doing and Susan expressed that she was in much better spirits than when they had talked last. She has since seen the psychiatrist and will have continued follow up appointments to address her mental health concerns. She explained to her pharmacist that she felt so much better now after talking about what was weighing on her and how her symptoms were affecting her overall mindset. Susan recounted the quick response by the entire care team after her initial call with her pharmacist and how extremely appreciative she was of everyone’s care and concern for her. Susan was beyond grateful for the support she received from her care team and thanked everyone for their continued kindness. Feeling relieved and finally hopeful at the end of the phone call, Susan said through a little laugh, “actually, I love you.”