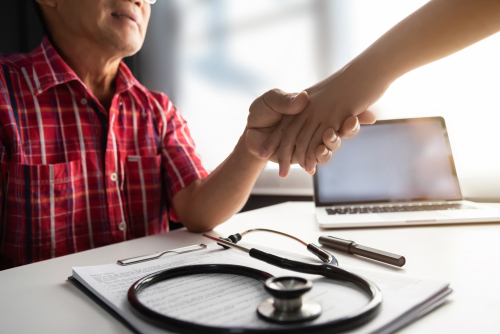 Michael was diagnosed with a chronic condition a few months ago and has been filling his specialty medication with a large national pharmacy chain ever since. When he came in for a doctor’s appointment a couple of weeks ago, a woman introduced herself during the appointment as his designated Pharmacy Liaison. As the woman explained to Michael all of the services that a Liaison and the hospital specialty pharmacy offer to patients such as free home delivery, refill check-in calls, financial assistance, etc. Michael couldn’t believe it. He had no idea that these services existed for patients and was frustrated that he settled for filling at a different pharmacy for so long.

Michael explained to his new Liaison that he had been filling at a national pharmacy chain since he was diagnosed with his condition and although they offered home delivery, it did not make up for the fact that his medication has never come on time or delivered in the correct packaging.  He revealed that currently, his medication refill was four days late because the pharmacy he was using was waiting on a pending refill request. The pharmacy’s inconsistent service and delayed deliveries over the course of a few months has caused Michael’s condition to significantly worsen and has caused a lot of concern for Michael’s doctor.

When Michael found out about all of the benefits of filling at the hospital specialty pharmacy and not having any delays in treatment due to medication mistakes, he was ecstatic.  The turnaround time, as well as hearing about weekly or monthly adherence calls, promoted Michael to switch his medications over to the hospital specialty pharmacy that day. He told his Liaison how grateful he was that she offered that little extra push of outreach and encouragement to ensure that he would be not only staying on top of his medications every day, but also staying healthy so that he could keep doing the things he loved.