Someone To Lean On 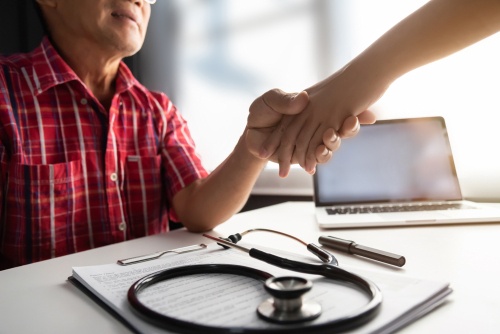 For Michael, undergoing a transplant surgery a few weeks back was overwhelming and nerve wracking in and of itself. What kept him going was the anticipation of a quick recovery and a short stay in the hospital, so that he could eventually transition into living a more normal life after his surgery. Unfortunately, Michael’s plan was derailed when his hospital stay was extended by 5 days due to some small complications.

Although Michael tried to stay in good spirits, his confusion and apprehension grew each day he stayed at the hospital and he began to feel defeated. As more and more doctors, nurses, and other care providers visited him and gave him vital information about his recovery, next steps, and his treatment plan, he started to feel very overwhelmed. When his pharmacy liaison came in to speak with him, Michael had just about reached his limit of important information for the day. Because he felt confused and overwhelmed after all his previous conversations, Michael asked his pharmacy liaison if one of his friends could be there to “be another ear” for him and help him through everything. In addition, Michael asked his pharmacy liaison if he could record the conversation and teaching lesson so that he could go over it when he went home and wouldn’t miss any vital information. His pharmacy liaison allowed him to record the session while they meticulously went through every detail regarding his new medications, including where each medication went in the pill box and how to manage all of his various medications when he was discharged. Michael started to feel renewed and hopeful for the first time since his surgery as his pharmacy liaison described the services that the hospital specialty pharmacy could provide to him, with the sole purpose of making his life easier during recovery. Michael was able to learn more about the mail-order service for his medications, the refill reminders, the financial assistance services, and much more, ensuring that he would not be left to handle it all by himself once he left the hospital.

After that meeting, Michael felt a release of all the stress and confusion he had built up over the past few days in the hospital. He was more confident about his recovery now that he knew he had his pharmacy liaison to lean on when he needed to. When Michael was finally discharged, he ended up calling his trusty liaison to ask a few questions regarding the logistics of his medications, which his liaison happily answered. Michael expressed that he was so appreciative and grateful of the fact that he could call either his liaison or the pharmacy team on short notice and receive a quick response without having to wait on hold forever. He felt secure in the fact that he had a team behind him that was willing to help in every aspect possible in order to help him live a normal and healthy life going forward.